There was a gun rampage earlier today in the Thai city of Nakhon Ratchasima which was caused by a soldier whom has caused the death of 21 people and injured dozens more.

Jakraphanth Thomma, the soldier in question on Saturday, killed his commanding officer before stealing weapons from a military camp.

The suspect continued his attack in a shopping centre, where he is still believed to be holed up, initially posting updates on his social media.

Nevertheless,Security forces are in the complex and have rescued hundreds while searching for the gunman, with shots ringing out.

What is the situation now?

The Terminal 21 shopping centre in Nakhon Ratchasima, also known as Korat, remains sealed off on Sunday.

Shortly after 03:00 local time (20:00 GMT Saturday) gunfire was heard as the security forces raided the building, trying to dislodge the gunman.

One member of the security forces was killed and two injured.

Several people were led out of the centre, but it is not clear on how many more people are still trapped inside.

As it was told by earlier reports, that the gunman had tried to escape through the back of the building.

The Bangkok Post reported earlier that the suspect, who it said was 32 years old, had taken hostages, but this also has not been officially confirmed.

Although,The suspect’s mother was also brought to the shopping centre to try to persuade him to give himself up. 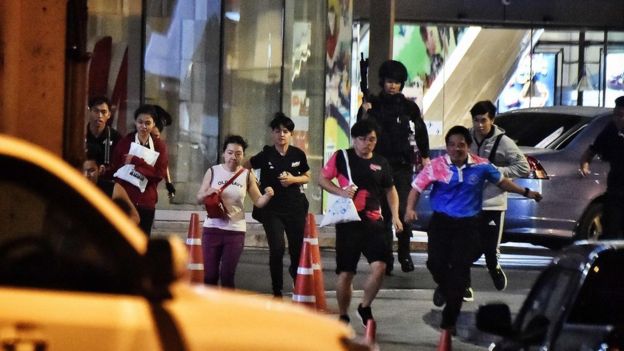 According to BBC,One of the people freed told them how she and others hid in a bathroom on the fourth floor, before fleeing to the second and hiding under a restaurant table for three hours, hearing at least four gunshots before she saw some soldiers and could get to safety.

Meanwhile,Public Health Minister Anutin Charnvirakul earlier narrated that 16 people had died at the scene of the shootings, with another four dying later in hospital.

In addition, A total of 31 people have been injured, with 10 of them in a critical condition. But there are fears the numbers could rise.

ALSO READ: THE KIDNAPPERS OF 5 YEARS OLD GODDAY HAS BEEN APPREHENDED BY THE IMO STATE POLICE COMMAND.

How did the attack unfold?

This act began at about 15:30 local time on Saturday (08:30 GMT) at the Suatham Phithak military camp, where the commanding officer, named by the Bangkok Post as Col Anantharot Krasae, was killed.

The Post said a 63-year-old woman, Col Anantharot’s mother-in-law, and another soldier were also killed there.

The suspect seized arms and ammunition from the camp before taking a Humvee-type vehicle.

Local media footage appeared to show the suspect getting out of his vehicle and firing shots as people fled. 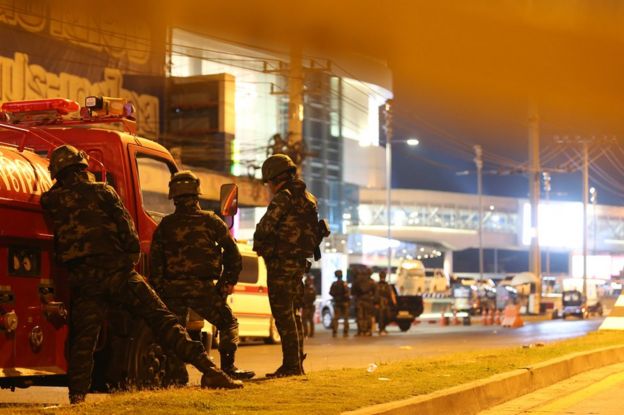 Other footage showed a fire outside the building, with some reports saying it was caused by a gas canister that exploded when it was hit with a bullet. this was shown by One of the suspect’s social media posts which featured an image of himself with the fire in the background.

According to a spokeswoman, she reported that the Prime Minister Prayuth Chan-ocha is following developments and expressed condolences to the families of those killed, a spokeswoman said.

The public health minister is appealing to people to donate blood at hospitals in the area. 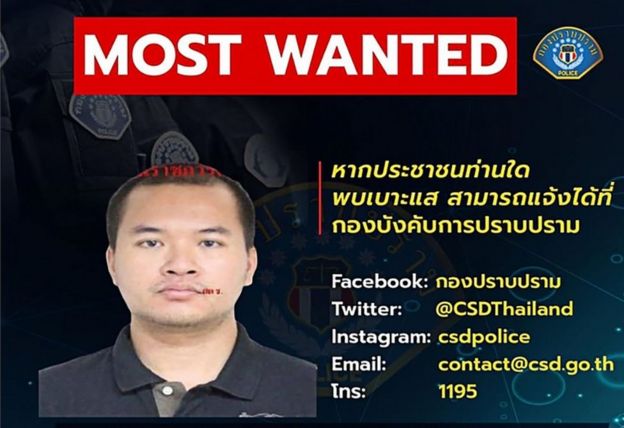 What the suspect post on social media is it out of guilt or fear?
He made a statement on his social media accounts during the attack, with one post on his  Facebook page asking whether he should surrender.

However, earlier he had  posted an image of a pistol with three sets of bullets, together with the words “it is time to get excited” and “nobody can avoid death”.

READ MORE: 2023: Gov. Wike reveals what anyone seeking to succeed him as Rivers Governor must do

It said: “Our hearts go out to the victims, their families and the community affected by this tragedy in Thailand. There is no place on Facebook for people who commit this kind of atrocity, nor do we allow people to praise or support this attack.”

As Compiled by Cindy Wyndi

And Edited by Knight  Fredel

Enable Notifications    OK No thanks